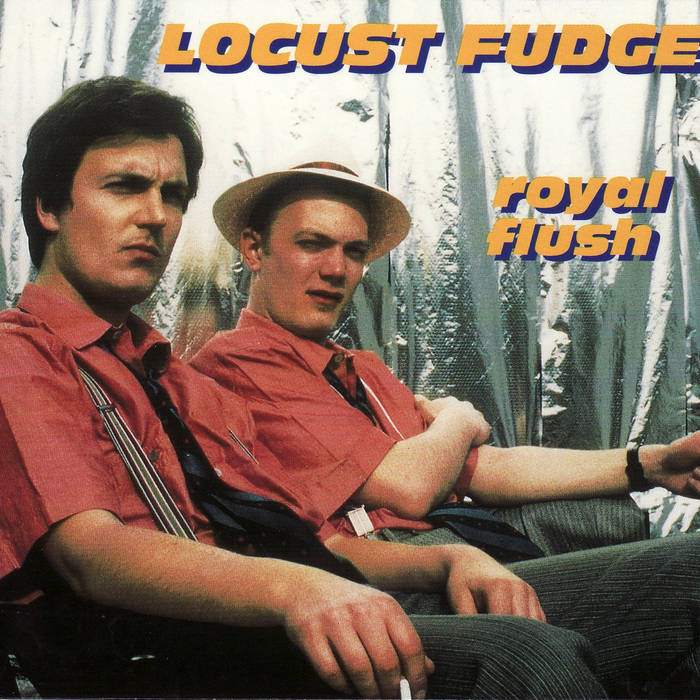 Flush & Royal Flush are available as 2 x LP at:
kapitaen-platte.de?wpsc-product=pre-order-locust-fudge-flushroyal-flush-2lp

In 1991 LOCUST FUDGE was founded by Schneider (a.k.a. Dirk Dresselhaus of Schneider TM, Angel, ex-Hip Young Things etc.) and Krite (a.k.a. Christopher Uhe, ex-Speed Niggs, ex-Sharon Stoned, ex-Floor etc.). The two of them had met on different occasions when both of their rather noisy indie rock outfits HIP YOUNG THINGS and SPEED NIGGS appeared on the same bill. Pretty soon they decided to play acoustic versions of their bands’ semi-hits to ignorant audiences of passers-by on the streets of Schneider’s home town Bielefeld. What started as a good reason to hang out and have a couple of drinks together soon draw the attention of Reinhard Holstein, CEO of Glitterhouse Records, a fine German company that was operating the European business for Seattle’s Sub Pop label, home to the likes of Nirvana, Mudhoney and others who were just about to define a new hype soon to be called Grunge. Holstein encouraged LOCUST FUDGE to record an album for his label. Their debut album „Flush“ was released in 1992, receiving widespread media coverage all over Europe. After touring as a duo for quite a while, Schneider and Krite recorded their ground-breaking follow-up „Royal Flush“ in 1994, a milestone of lofi-glam-folk to this very day. The album’s delicate arrangements demanded a somewhat bigger live sound, and thus the 5-piece LOCUST FUDGE BAND was formed to go on the road with the new material. After extensive touring throughout Europe LOCUST FUDGE released the EP „Business Express“ in 1996. A year later Schneider and Krite decided to kick back a little; LOCUST FUDGE have been pretty lazy ever since. Although they never split up (in fact, they decided to observe the market instead of getting involved), there seems to have been very little activity over the last decades, the last vital sign being a song entitled „Cannibal Man“, their contribution to „Perverted by Mark E. – A Tribute to The Fall“ by ZickZack. Random appearances on stages in Berlin and elsewhere over the last years have fueled the rumors of LOCUST FUDGE coming back to the surface at some point in the 21st century, being neither confirmed nor denied so far.

„Royal Flush“ is the second album of Schneider’s and Krite’s long time project Locust Fudge. Originally released on CD in 1995 on Glitterhouse Records, „Royal Flush“ was almost entirely recorded on a cheap 4-track cassette recorder at Schneider’s house in Bielefeld. The newly found freedom of recording without any financial pressure in a homerecording-type way gave room to a rather experimental approach towards the new material, expanding way beyond Schneider’s and Krite’s roots of 80ies indie rock and folk music. Locust Fudge surrounded themselves with a pile of junk keyboards, broken guitars, trashy amplifiers, crap rhythm machines and budget microphones to explore the boundaries of the new songs written on and off touring with their debut album. Lacking a sampler in those days, Locust Fudge started to play all kinds of loops to simulate the possibilities they didn’t have and thus came up with a new sound that was completely different from the indie rock approach of their other early 90ies bands and projects, though still featuring their well-renowned songwriting. The release of „Royal Flush“ was highly acclaimed internationally and followed by extensive touring of the 5-piece Locust Fudge Band, establishing Schneider’s and Krite’s reputation as entertainers capable of extending 90-minute-sets up to three hours by harassing audiences with their challenging sense of humour – another side of Locust Fudge that could first be heard on „Royal Flush“, but only if you carefully read between the lines.

Originally released by Glitterhouse Records in 1995.

All instruments by Locust Fudge except:
backing vocals on Song To Philippe by Christoph Pfeifer,
additional percussion on Keep An Eye by Mark Kowarsch,
spoken words on Cake by Steven Jesse Bernstein, sampled from Come Out Tonight on Sub Pop-200,
spoken words on Inside Out by Jochen Distelmeyer, sampled from L'Etat Et Moi by Blumfeld.