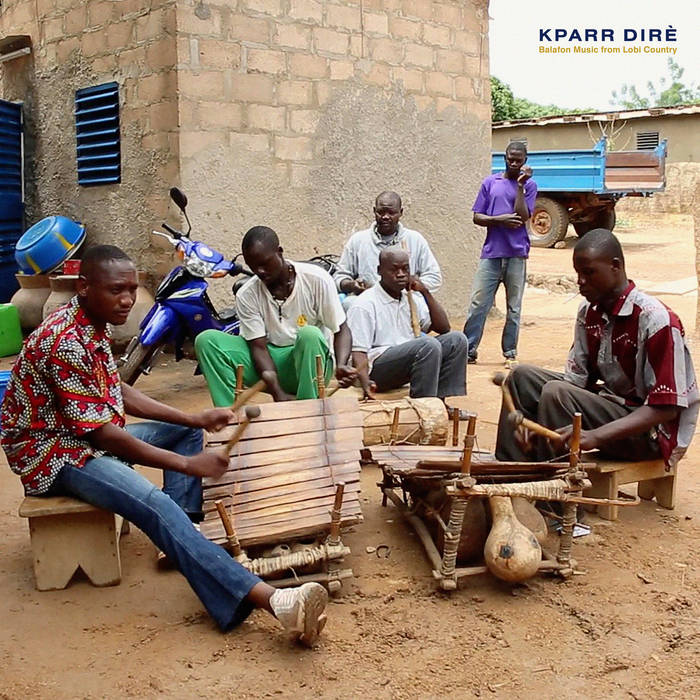 LP + DVD with full-length movie (125 minutes) of Balafon music of the Lobi people, recorded in and around Gaoua, Burkina Faso, on a two-week journey in June 2014, by Dirk Dresselhaus (Schneider TM), Julian Kamphausen and Arved Schultze. Packaged in a full-colour gatefold sleeve with DVD slide, with numerous photos and an extensive interview with Dresselhaus.

ALL PROFITS go to the involved musicians in Burkina Faso !

The Lobi are an ethnic group of about 180,000 people living in southern Burkina Faso and bordering regions. The primary instrument of their traditional music is the balafon, played solo or in a duet, usually accompanied by percussionists. Lobi balafon music serves as a complex language for communication with the audience but also with ancestors and spirits. Different kinds of music are used for different purposes and social atmospheres (birth, death, joy, hunting, war, etc.).

At its core, this music is hundreds of years old and knowledge of its mastery is passed on from generation to generation, with different styles emerging in different regions and outside influences picked up on the way. The first well-known recordings of Lobi balafon music were made in 1961 and published on the Ocora LP "Musiques du pays Lobi". While the tunes heard there clearly show their ancient roots, the music on this release is not isolated from current influences and carries traces of modern African electronic pop music and Contemporary R&B that is widespread in the region. This has led to a new minimalist, poly-rhythmic and breakbeat-laden style prominent in Gaoua, to our knowledge recorded here for the first time. Yet the pieces are the same traditionals, played differently from generation to generation and from day to day.

Musicians on the LP are Martin Kensiè (Da Toh Alain) and ensemble, and Palé Goukoun. Their fathers – Kambiré Tiaporté and Palé Tioionté, respectively – had been recorded in the 1990s for the Ocora CDs "Pays Lobi, Xylophone de funérailles" and "Pays Lobi, Xylophones du Buur" that served as the starting point for this journey. The DVD features a full-length movie by Arved Schultze, documenting the trip through various localities and villages, with numerous performances also including other musicians.

"One has to differentiate between the kind of music (Gopèr, Lèr, Binkontina, Djèdjè, Djandjan, ...), which is distinguished by the respective social atmosphere (hunting, war, joy, death, birth, ...) and title (rather what is regularly emphasized as leitmotiv). The music genre 'Lèr' does indeed mean warming up, and the title 'a Bimbina' means nothing special, it means 'free play'."
– Issaka Yameogo, 2019

Recordings made in Martin Kensiè's yard in Gaoua (A1, A2, B1) and Palé Goukoun's yard in Gongonbili (A3, B2), Burkina Faso.
Mixed June 2014 at Auberge Donsamby, Gaoua, and mastered July 2019 at ZONE, Berlin. Recorded, mixed and mastered by Dirk Dresselhaus (Schneider TM).

The trip to Gaoua was funded through the Fonds TURN of the German Cultural Foundation (Kulturstiftung des Bundes).

When I entered an Afro shop in the train arches near Alexanderplatz in Berlin in spring 2003, I had no idea what this moment would trigger in the years after. So I entered this shop and saw two strange percussion instruments that were unknown to me: a kind of prehistoric xylophones with a lot of calabashes underneath. The nice owner of the shop explained to me that they were balafones that he had brought from an old man in northern Ghana. We quickly agreed and I bought one of the two instruments that I used for the next few weeks while recording a new Schneider TM album. After a while I got curious and went to the world music department of Dussmann, a book and media retailer, to research balafon music from West Africa. Much of the music from Ghana, Ivory Coast etc. I found was great, very pentatonic and sometimes a bit cheesy, but it was only when I discovered the two Ocora releases of Lobi music from Burkina Faso (“Pays Lobi, Xylophone de funérailles” and “Pays Lobi, Xylophones du Buur”) that it really blew me away. The open (dis-)harmonies, very similar to the tuning of the balafon I had at home, and syncopated polyrhythms moved me deeply and were somehow the most futuristic thing I had ever heard. In the years that followed, I often incorporated the two CDs into my DJ sets and mixed some of them with drone & noise music, which somehow complemented each other perfectly. Like two long lost relatives who suddenly see each other again.

In 2013 I received a call from Arved Schultze and Julian Kamphausen regarding a possible study trip to Africa, funded by the TURN fund of the German Cultural Foundation, to look for musicians or artists with whom there should subsequently be an African-German cooperation as a cultural exchange. I immediately thought that we absolutely have to go to Gaoua, Burkina Faso, to find out if the Lobi musicians were still around whose music I had sucked in all the years before and about whom you could otherwise hardly find any information on the Internet etc. The two initiators were immediately enthusiastic and in June 2014 the trip took us via Bamako (Mali) and Bobo-Dioulasso (Burkina Faso) finally to Gaoua.

As luck would have it, my sister knew a university friend who was to build a street for an NGO in Gaoua in 2001 and since then had a good friend in Burkina Faso who had lived in Gaoua for a long time and worked there as a German teacher. We met this friend, Issaka Yameogo, at a bus station on the way to Gaoua, and on the same evening he introduced us to his old friend Somda Desiré, who was very well connected in the capital of the Lobi people and in turn directly brought us together with the balafonist Martin Kensiè. Martin turned out to be the son of one of the musicians who unfortunately had already died at that time and who had played on the Ocora CDs from the 1990s. All of this happened immediately after arriving in Gaoua and was the start of two intense weeks in which we were introduced to the music and culture of the Lobi and Dagara people and deep friendships were formed. This was when the recordings took place that are now released as LP & DVD by Edition Telemark / MWM and that originally were intended only for documentation as preparation for future collaboration. Since there never was a collaboration between Martin Kensiè, his ensemble and us experimental musicians from Europe due to a lack of follow-up funding, we have at least managed to make these unique and magical recordings available to the public after a long period of preparation.