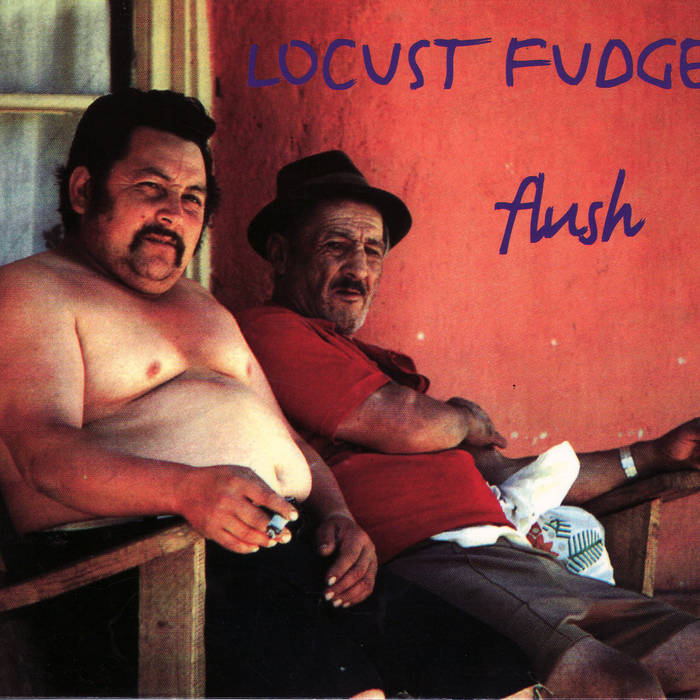 Flush & Royal Flush are available as 2 x LP at:
kapitaen-platte.de?wpsc-product=pre-order-locust-fudge-flushroyal-flush-2lp

In 1991 LOCUST FUDGE was founded by Schneider (a.k.a. Dirk Dresselhaus of Schneider TM, Angel, ex-Hip Young Things etc.) and Krite (a.k.a. Christopher Uhe, ex-Speed Niggs, ex-Sharon Stoned, ex-Floor etc.). The two of them had met on different occasions when both of their rather noisy indie rock outfits HIP YOUNG THINGS and SPEED NIGGS appeared on the same bill. Pretty soon they decided to play acoustic versions of their bands’ semi-hits to ignorant audiences of passers-by on the streets of Schneider’s home town Bielefeld. What started as a good reason to hang out and have a couple of drinks together soon draw the attention of Reinhard Holstein, CEO of Glitterhouse Records, a fine German company that was operating the European business for Seattle’s Sub Pop label, home to the likes of Nirvana, Mudhoney and others who were just about to define a new hype soon to be called Grunge. Holstein encouraged LOCUST FUDGE to record an album for his label. Their debut album „Flush“ was released in 1992, receiving widespread media coverage all over Europe. After touring as a duo for quite a while, Schneider and Krite recorded their ground-breaking follow-up „Royal Flush“ in 1994, a milestone of lofi-glam-folk to this very day. The album’s delicate arrangements demanded a somewhat bigger live sound, and thus the 5-piece LOCUST FUDGE BAND was formed to go on the road with the new material. After extensive touring throughout Europe LOCUST FUDGE released the EP „Business Express“ in 1996. A year later Schneider and Krite decided to kick back a little; LOCUST FUDGE have been pretty lazy ever since. Although they never split up (in fact, they decided to observe the market instead of getting involved), there seems to have been very little activity over the last decades, the last vital sign being a song entitled „Cannibal Man“, their contribution to „Perverted by Mark E. – A Tribute to The Fall“ by ZickZack. Random appearances on stages in Berlin and elsewhere over the last years have fueled the rumors of LOCUST FUDGE coming back to the surface at some point in the 21st century, being neither confirmed nor denied so far.

'...At some time Krite and Schneider mentioned they were planning a mutual project, Locust Fudge. „More, like, acoustic, stripped down songs, kinda like getting naked, you know?“. Throw in a few cover versions, avoid spending a whole lot of time in the studio. And would we, Reinhard Holstein and myself, aka Glitterhouse Records, consider releasing what they came up with. We were thrilled. On the one hand we were excited to hear what the outcome would sound like, and on the other hand, though we were known for signing any american musician with an acoustic guitar at the time, we were slowly becoming weary of exactly this very formulaic and conventional sounding Americana. We were sure these talented rascals had something to throw into the mix: Originality, the courage to experiment, a fresh angle, and quite simply class. We had no actual expectations of Locust Fudge other than the strong belief that they would deliver something unique and special. „Sure, go on“, we said, „sounds good to us“.
Right before the recordings for their debut „Flush“, Reinhard, Schneider, Krite and I were sitting together drinking beer and we asked „Is there anything else you need from us?“. „We could use two harmonicas, but can't really afford them right now“, was their offhand answer. Needless to say, that was one request that wasn't going to bankrupt us.

Their debut „Flush“ was an exercise in mutual respect for their shared songwriting capabilities and it carried through on our high hopes. Fragile harmonies, a heartwarming depth combined with wistfulness, but also an easygoing levity. Their own songs had a way of glistening languidly, hinting at things life has in store for us, things that we could never actually picture or verbalise. Wishing, yearning, despairing – but at the same time keeping a distance from it all. There is no room for escapism, but simply drowning in a sea of introspection is not their cup of tea either. And the cover versions only add to the result. This is not about pulling out an obscure treasure from the remotest depths of your record collection. This is about splendour for splendour's sake. „Thrasher“ and „I love you“, and even more so The Notwist's „Our alien“ fluctuate between candidness and world weary prowess. As unfinished, innocent and deliberately imperfect the record may sound, „Flush“ is no less than a masterpiece!...'

'...By 1993 Krite and Schneider had both pretty extensively explored the ins and outs of guitar-based songwriting with their main bands Speedniggs and Hip Young Things. And while it was never actually brought up, both might have begun to become a little bit bored. As the manager of the Hip Young Things at the time, I initially viewed Locust Fudge with a whole lot of skepticism. According to my masterplan I would have had Schneider focussing on his main band who were surely headed straight for world domination and global fame. Complete nonsense of course, but how could I have known that at the time?!

Anyway, Krite and Schneider locked themselves in Schneider's flat in Bielefeld for some time and came up with „Flush“ - a monolithic album shining a light on the talents of each individual songwriter and baffling the listener in the process. The absence of the previously overly familiar distorted guitars stripped the songs of any ornamental padding and really bowled you over.

Essentially the album consisted of nothing but cover versions – Krite and Schneider choosing to cover Neil Young, The Notwist and themselves. Almost all their own songs had been played by their previous bands earlier on, but the forte of this record is, that not at one point in time do you think to yourself: 'Ah, heard that one before!' 43 extremely consistent minutes of music, begging to be listened to again and again and again...'

Originally released by Glitterhouse Records in 1993.

All instruments & vocals by Christopher Uhe (aka Krite) & Dirk Dresselhaus (aka Schneider), solo guitar on Toys In The Deepfreeze by Christoph Pfeifer.