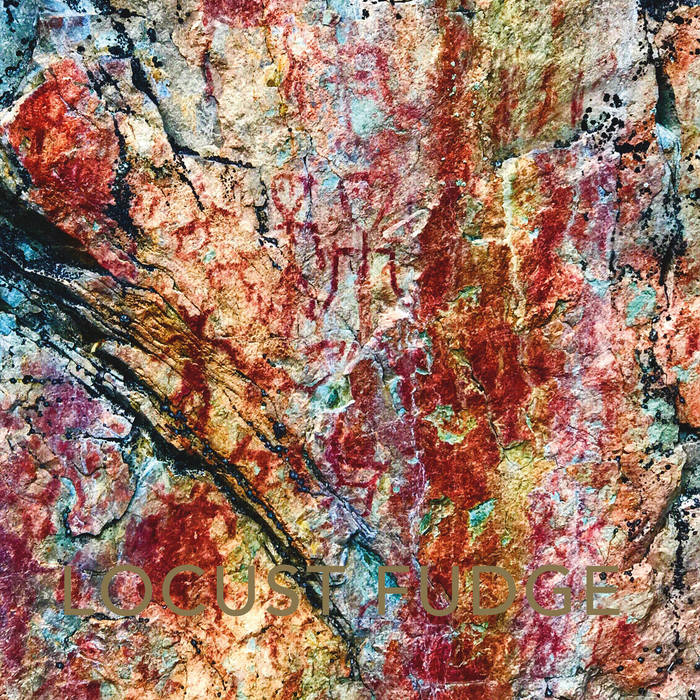 On their album Oscillation Locust Fudge grab the roots of what later was to be called 'Indierock’, turn them upside down and combine them with sometimes unusual & surprising elements to rewrite it’s history in the most organic way and beam it into the future.
In 2015, Berlin-based musicians Dirk Dresselhaus (Schneider) and Christopher Uhe (Krite) start recording an album together. Alongside drummer Chikara Aoshima, they kick off something like a roots project: songs, written over the last couple of years, are tracked live as a trio. Out of infrequent sessions emerges the first LOCUST FUDGE album in 20 years.

The songs, written over a long period of time, fed by doubt and hope, by absurdity and dissolution on micro and macro levels - personal, social, ethical – meet the status quo with LOCUST FUDGE-esque clear messages to the assholes of the world to „get your ticket ...“ and piss of (Light & Grace), re-activate Dylan Thomas' often used plea Do Not Go Gentle Into That Good Night, examine the relationship of reason and emotional Oscillation, insist on staying true to the event of love in No Defense. In a genuine dialectical manner an album takes shape, with Schneider's and Krite's symbiotic play taking up the classic work of LOCUST FUDGE, but emerging in new forms, thus becoming something like their second debut after more than 25 years of the band's existence. It features guest appearances by friends, comrades and colleagues like Chris Brokaw (Come, Codeine etc.), Lucio Capece (Vladislav Delay Quartet etc.), Julia Wilton (Pop Tarts, Das Bierbeben), Gwendolyn Tägert (Mondo Fumatore, Half Girl), Michael Mühlhaus (Blumfeld, Die Türen), Ulrich Krieger (Lou Reed, Metal Machine Trio), J Mascis (Dinosaur Jr.), Wolfgang Seidel (Ton Steine Scherben, Conrad Schnitzler), Werner „Zappi“ Diermaier (Faust), Günter Schickert (Ziguri) and others. The album was recorded and mixed at Schneider's ZONE, a studio where he regularly produces acts like Faust, Mutter, Golden Diskó Ship, Chris Imler, Ziguri and others.

FLASHBACK:
In 1991 Schneider (back then singer, songwriter and guitarist with HIP YOUNG THINGS) and Krite (then singer, songwriter and guitarist with the SPEED NIGGS) founded the duo LOCUST FUDGE and started playing acoustic versions of their original bands' semi-hits to ignorant audiences in the streets of their hometowns. What originally was a pretext to hang out together soon draw the attention of Reinhard Holstein, CEO of Glitterhouse Records, the European business arm for Seattle’s Sub Pop label, home to the likes of Nirvana, Mudhoney and others who were just about to define a new hype soon to be called Grunge. Holstein encouraged LOCUST FUDGE to record an album for his label. Their acoustic guitar-driven debut
album FLUSH was released in 1993, receiving widespread media coverage all over Europe. After touring as a duo for quite a while, Schneider and Krite recorded their ground-breaking follow-up ROYAL FLUSH in 1994, a milestone of lofi-glam-folk to this very day. The album’s delicate arrangements demanded a somewhat bigger live sound, and thus the 5-piece LOCUST FUDGE BAND was formed to go on the road with the new material. After extensive touring throughout Europe LOCUST FUDGE released the EP „Business Express“ in 1996. Besides working with LOCUST FUDGE, Schneider and Krite had released numerous albums and toured extensively with their bands Hip Young Things and Sharon Stoned and different side projects.
By the end of the 1990s, Schneider and Krite moved to Berlin. Alongside Japanese performance artist Hanayo, they reunite in the noise-pop outfit PAINCAKE and performed in unusual surroundings like the Urbanisation Congress Cities on the Move 6 in Bangkok 1999, the opening of the Japanese Pavilion at the Venice Biennale of Architecture 2001, an exhibition opening at the Palais de Tokyo in Paris, and many others. After the band's demise in 2002, Schneider and Krite went separate ways for a while. Schneider, who'd been involved with electronic music for years, would become a worldwide trailblazer for a music genre called Indietronica with Schneider TM and his hits Reality Check, Frogtoise, and the Smiths cover The Light 3000, being hugely acclaimed not only by John Peel. Schneider started the noise- and drone band ANGEL with Ilpo Väisänen (Pan Sonic), is part of the three-guitar outfit A S S with Günter Schickert and Jochen Arbeit (Einstürzende Neubauten), and has been working on experimental music in numerous collaborations, as well as being a composer for film, radioplays and performance theater etc... During the first years of the new millennium, Krite produced albums for bands like Ragazzi, The Innits and Julia Hummer's Too Many Boys. Becoming musical director for the René Pollesch play Prater Saga 4 at the Volksbühne Berlin in 2004 marked the beginning of a long-term artistic partnership with director Stefan Pucher; they're working together continuously at theaters in Berlin, Hamburg, Munich, Zürich and elsewhere to this day. Besides compositions for She She Pop, Krite joined the British-German performance collective Gob Squad to devise the show Revolution Now!, which since its Berlin Premiere in 2010 has been invited to tour all over Europe and South America, being shown in Italy, Greece and the USA in 2017.
Amid those diverse activities, irregular vital signs of LOCUST FUDGE could be witnessed: random shows in Berlin and the Song Cannibal Man, featured on PERVERTED BY MARK E. - A TRIBUTE TO THE FALL by ZickZack Records fueled the rumor of LOCUST FUDGE re- surfacing at some point in the 21st century, being neither denied nor confirmed, until their first two albums FLUSH and ROYAL FLUSH were re-released on vinyl in 2014, and the band embarked on their first tour in 20 years to present the classic material alongside a bunch of new songs.