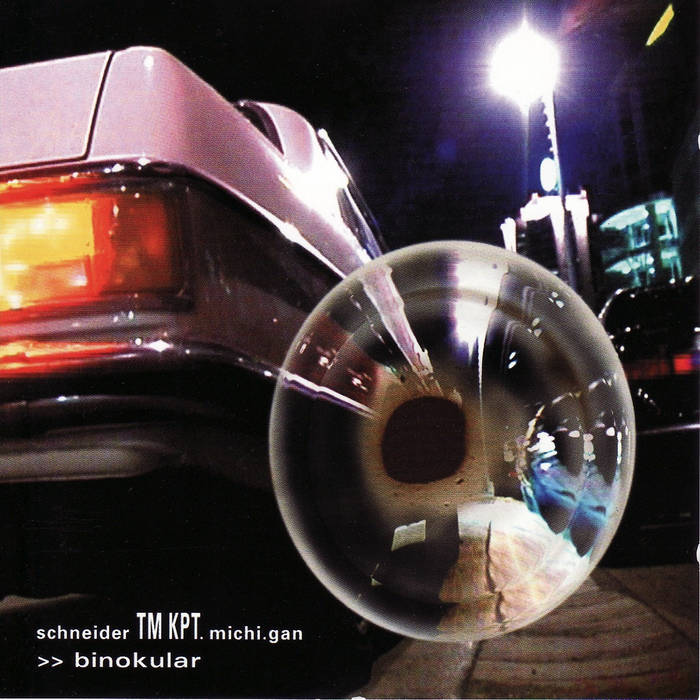 Binokular is a split EP by Schneider TM & Kptmichigan which was released in 2000 on City Slang and contains a coverversion of the song 'There Is A Light That Never Goes Out' by The Smiths called The Light 3000.
This was the official release-info:

To define schneiderTM as a prankster or a joker would be wrong, but its hard to take anyone who announces that their new recordings are „grandma-fucking handsome sounding„ totally seriously. So, before you adopt the earnest pose of one about to endure yet another album of nondescript blips and bleeps, let us introduce you to a world where nothing is quite what it seems, and no one is quite who you thought they were...
Like an excitable kid let loose in a school laboratory, schneiderTM is about to blind you with science. This is, however, just as likely to be through his knowledge of chemistry as because he just dropped the test tube for a laugh. Dirk Dresselhaus, as his mother knows him isn‘t your average electronic pioneer. For starters, this is a man who played his first UK gig by playing his own records at half speed while hidden behind a curtain. This is a man who spent much of the last decade making indie rock for German adolescents, to some success, we might add. And this is a man who claimed that the highlight of his time with City Slang so far has been digging up dead bodies whilst mashed on shrooms.
binokular is the follow up to schneiderTM‘s debut album, MOIST, though it is not meant to be seen as his second album. It is in fact a mini album and a collaboration with KPT.michi.gan aka Michael Beckett, who usually joins schneiderTM for his live excursions. A very special split-ep where each contributes solo tracks but both also collaborate on certain songs. Where MOIST saw schneiderTM getting to grips with his new box of electronic toys, binokular sees him upgrading that equipment, studying the manuals closely, and then ignoring every piece of advice contained within. binokular sees our German / English friends combining a unique understanding of the atmospherics of those sounds that you cant quite place with the most beautiful of melodies. Its a contradictory experience that covers a vast amount of ground in a very short space of time, playfully experimental and seriously entertaining at the same time. It also showcases young father KPT.michi.gan en route to some of the densest, deepest exploration of electronic alley, some might, not entirely appropriately call ambient music. The record features the odd mix of solo tunes and collaborations, thus takes the old split-record concept to much higher levels. White p(h)unks on dope, indeed.

Track Name: The Light 3000
Take me out tonight
Where there’s music and there’s people
And they’re young and alive
Driving in your car
I never never want to go home
Because I haven’t got one
Anymore

Take me out tonight
Because I want to see people and i
Want to see life
Driving in your car
Oh, please don’t drop me home
Because it’s not my home, it’s their
Home, and I’m welcome no more

Oh, there is a light and it never goes out...