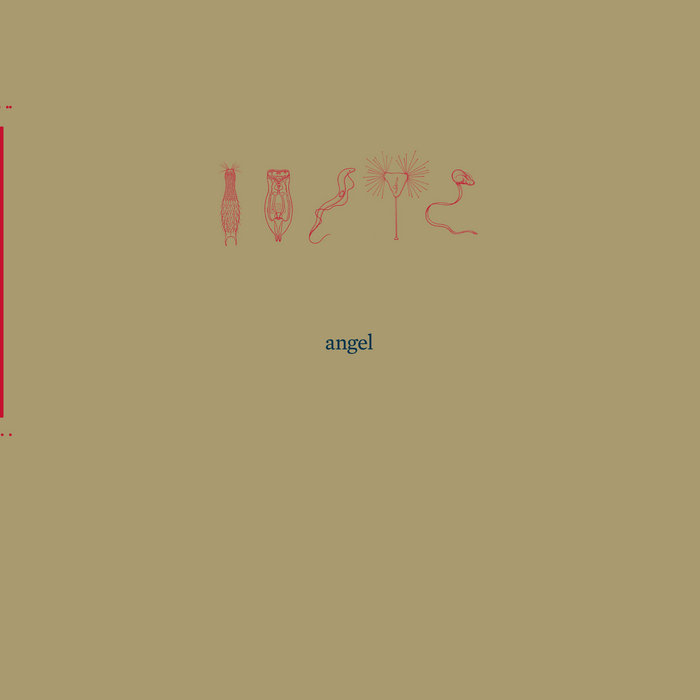 Angel is Ilpo Väisänen (Pan sonic) and Dirk Dresselhaus (Schneider TM) who play time-transcending freeform sound, weightlessness and gravity of electromagnetic signals together since 1999.
The 5 tracks describe the last period of a 26000 years long cycle that leads to a new situation on this planet.
26000 was recorded between 2008 and 2010 at Construction Site Studios in Berlin & Ilpo's cottage in Karttula, Finland and features guest appearences by Hildur Gudnadottir, BJ Nilsen and Oren Ambarchi.
The repertoire of the instruments is very wide: glassbowls, metal objects, pieces of wood, grass, birds, dragonflies, lake echo, smoking box and the regular electronic equipment as well as acoustic instruments.

" nothing is wider than empty things " (francis bacon)

" time is the accident of accidents " (epi kuros)

Angel is the duo of Ilpo Väisänen (Pan Sonic) and Dirk Dresselhaus (Schneider TM). The sound duo’s latest describes “the last period of a 26,000 years-long cycle that leads to a new situation on this planet.” This is a lofty proposition indeed, but in terms of grand scope and looking ahead, 26000 does yield poignant results. Like a less musical sister of the Chicago duo Cleared, or a less overtly structured cousin to Rene Hell’s The Terminal Symphony, Angel sculpts sound with meticulous attention to detail, pouring in a wide array of instrumentation, processing, and layering. Every sound has a significance, a role to play in this challenging and ever-hardening (non-?)narrative.

This is an album that, along with some other contemporary sound work, is representative of a significant watershed moment. Sound art and “experimental music” have moved beyond the rebellious “for the hell of it” sound fuckery, catharsis, and novelty. We’re entered a period of increasingly meticulous yet abstract composition. Nothing is left to chance, or if it is, the chance is mediated. It parallels the moment in the art world in which postmodernism comes into focus, following the absurdity of Dada and Surrealism, the macho action painting of the Abstract Expressionists, and the careful statements of early Minimalism.

The Second Drone Wave (the first dating from the electroacoustic LaMonte Young/Tony Conrad times) is entering a classical age in which some on the leading edge are beginning to harness sound elements that previously seemed mysterious, random, or unusable. They are using digital, electronic, and acoustic means to define, whether purposefully or not, the sound and compositional values of the next generation of sound artists. The sound art of the future is being defined by albums like this one.

So what’s it sound like? “Before the Rush” is a surprisingly lively primordial drone stew, immersing Hildur Guðnadóttir’s cello and roiling feedback with a variety of electromagnetic textures, effects, and processing. There is a sense of remoteness and space that remains even with the fullness of the piece. “In” moves from non-rhythmic clatter to staticky, searing synth blasts. “Dark Matter Leak” features digitally cut-up abstractions that are meticulously layered, combined with thrilling acoustic touches like glass bowls and crinkling paper. “Out” slides purposefully back into percussive primitivism before “Paradigm Shift” grows into a powerful dark ambient drone as the album’s final statement.

This isn't ambient: this is industrial ambient, and man, it's ugly. Crackling, tearing distortion grates at the listener's ears, and continue to blast through the erratic waves of gurgles and groans, rumbles and drones, making it impossible to settle or ever get comfortable. Sonorous strings swoop and scrape, twisting and mutating from chords to discords. Huge celestial turbine-driven engines throb, powering the dark, all-engulfing sound. These are engines of destruction, powering astronomical blasts of sonic annihilation.

Elsewhere, tin cans, steel and tribal drums rain down like war; subterranean quakes shudder cavernously, rattling abandoned computer terminals that crackle and shower sparks into the darkness... it's the sound of technology degrading as the ground reclaims it and sinister, unknown life-forms emerge from the recesses, between the cracks...

With a scraggle of noise and feedback zone beginning 26000, Ilpo Väisänen and Dirk Dresselhaus continue their Angel duo with a work that inhabits its own zone of cryptic anger and contemplation. If anything, a sense of structure destroyed has been the hallmark of both Väisänen and Mika Vainio's work away from Pan Sonic, but 26000 in particular -- with Angel added and abetted by performers such as Oren Ambarchi and B.J. Nilsen -- introduces a sense of unspoken story to the proceedings, a soundtrack to a sci-fi film that emphasizes cosmic horror by implication. The slow roil that "Before the Rush" settles into, a combination throb and mechanistic growl, both parallels and contrasts the concluding "Paradigm Shift," the subtlest of bass rhythms anchoring overlaid drone murk and screeches of noise shaped and controlled like an event horizon reached and held. Central piece "Dark Matter Leak" sounds it, deep echoes and distant footsteps and other outer space haunted house noises interspersed with up-front bursts of percussion rattlings and glitches, a robot companion in space rapidly going on the fritz. The overlaid clatter of "In" and similarly frenetic mess of "Out" frame said dead center equally excellently.
******************************************
other reviews:
www.chaindlk.com/reviews/?id=6621